Workplace Sexual Harassment in Ireland – What you need to know 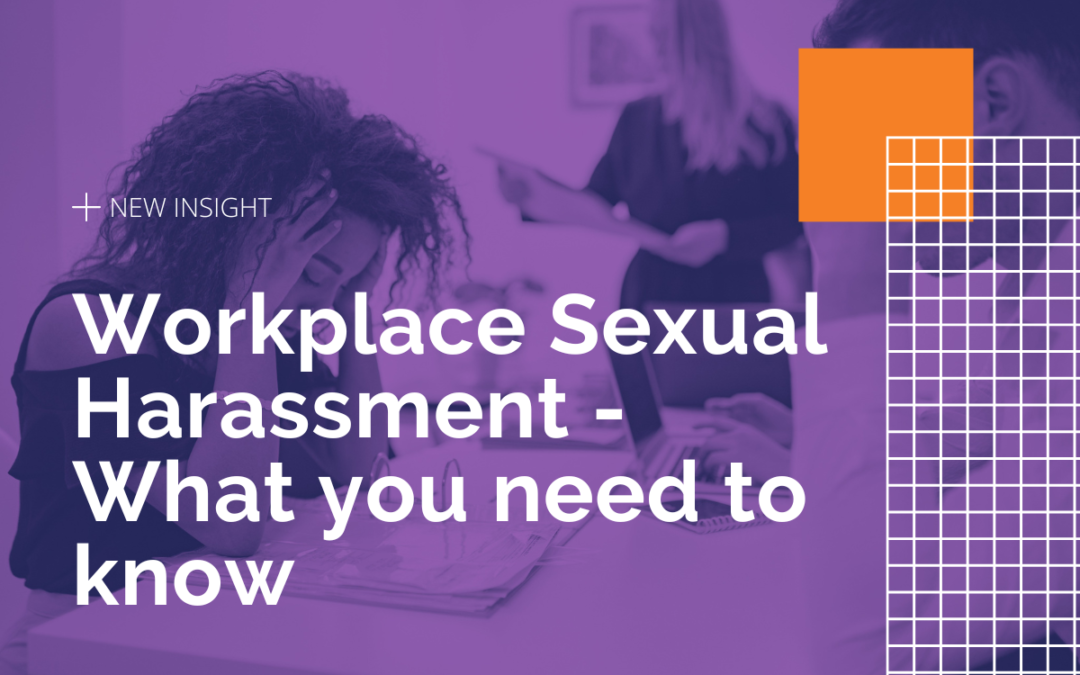 Exactly one year ago, in October 2021, the Dublin Rape Crisis Centre published a research paper aimed at finding solutions to workplace sexual harassment in Ireland. The survey of 940 individuals, which took place in 2018, showed that 75.7% of respondents said they had experienced sexual harassment. One of the most stark findings in the research revealed that out of those who had reported experiencing sexual harassment, 60 percent of them said they had been sexually harassed at work.

And although there has been increased efforts in breaking down barriers and supporting victims of sexual harassment through the worldwide #MeToo movement and local workplace supports and programs, 64% of those effected, did not report their experience.

Clearly, more has to be done.

In this month’s blog, we aim to guide you, the HR professional or business leader, through dealing with this topic, equipping you with the knowledge to reduce the chances of sexual harassment occurring in your workplace, to manage complaints, and most importantly, to support the relevant parties through what can be a traumatic experience.

P.S, we’ve also got a free HR Room Webinar – Sexual Harassment In The Workplace, coming up. Save your spot here!

But for now, read on!

What is sexual harassment? What is the definition?

Sexual harassment is defined in section 14A(7) of the Employment Equality Act as “any form of unwanted verbal, non-verbal or physical conduct of a sexual nature which has the purpose or effect of violating a person’s dignity and creating an intimidating, degrading, humiliating or offensive. environment for the person.”

“The conduct at issue may not be specifically directed at a particular employee but has the purpose or effect of violating a person’s dignity and creating an intimidating, hostile, degrading, humiliating or offensive environment for the person.”

The definition outlines that many forms of behaviour can constitute sexual harassment, including a single incident. Examples cited include but aren’t limited to:

What is the relevant legislation in relation to sexual harassment in the workplace?

Generally, the key legislation which cover the various aspects of sexual harassment are;

Given its broad scope and guidance, the Code of Practice is arguably the most useful resource available to HR teams for dealing with and preventing sexual harassment in the workplace.

The code was introduced on 18th March 2022 in response to growing concerns about this issue. The Code of Practice was developed, following consultation, by the Irish Human Rights and Equality Commission (IHREC).  The new Code replaces the Employment Equality Act 1998 (Code of Practice) (Harassment) Order 2002.

Some of the key aspects of the Code are;

How can an employee raise a claim of sexual harassment? What are the key steps?

Generally, there are two approaches an affected employee may take when they are raising a sexual harassment issue.

At a basic level, where an employee is comfortable to do so, there is guidance on taking an informal course of action, whereby the employee tells the person concerned that the behaviour, conduct or material is unacceptable and offensive. In reality, this can be very difficult for the individual, particularly in circumstances where they feel unsafe.

In these circumstances, the guidance also allows for a friend or colleague, a designated person at work or a trade union representative to approach the person on the employee’s behalf. Although, in our experience, this approach is rare as most employees fear that an informal intervention might make the situation worse and instead opt to raise their concerns formally, or leave them unreported.

As many of these claims can provoke quite an emotional reaction with the affected party, the informal route may be unsuccessful, or make not even be considered by the employee raising the issue. From here, the complaint moves to a formal procedure, usually leading to a workplace investigation.

In these cases, the employee will usually first consult the employer’s workplace policy on sexual harassment or the trained contact support person, to gain an understanding on what will happen when a formal complaint is made, how the complaint will be investigated, who will carry out the investigation, and will check the confidentiality and the rights of both parties.

What should an employer do when a claim of sexual harassment is raised?

First and foremost, when an employer, line manager or HR department receives a sexual harassment complaint from an employee, they should take the claim seriously, with sensitivity, and ensure they are equipped with the knowledge to handle a claim effectively. Be conscious of the mental state of the affected parties, and aim to have a clear, supportive, and resolution-focused process in mind throughout.

With regard to the investigatory process, the Code advises that it is ‘preferable that at least two people should investigate a complaint’ and that ‘the investigation team should have received appropriate training’. The Code is also very specific about the manner in which an investigation should be conducted, advising:

How can HR teams and organisations help to prevent sexual harassment occurring in the workplace?

The relevant legislation obliges employers to act ‘in a preventative and remedial way’, whilst the Code advises that they are legally responsible for harassment suffered by employees in the course of their employment, unless reasonably practicable steps were taken to prevent it, to reverse its effects and to prevent its recurrence.

The Code of Practice on Sexual Harassment and Harassment at Work, 2022, states that employers should have “comprehensive, accessible, effective policies that focus on prevention, best practice and remedial action.”

So, once we have a Dignity At Work policy or Sexual Harassment policy somewhere in our handbook, we’re covered? Absolutely not.

Similar to many policies, but particularly with claims of sexual harassment, the details of the policy, the channels of communication, the outline of the procedures, and the culture of support and guidance around the topic are what drives a policy from a tick-box exercise to one that is embedded in the fabric of the organisation.

As mentioned, it has been proven that raising a claim is quite stressful for an employee, so the more you can do to showcase how your organisation deals with these claims, will go a long way to helping employees take that first step.

Is it time to update your policies and procedures? Check out this podcast episode to learn more, or get in touch with us for a free consultation call to guide you through this important HR project.

As the employee’s line manager may, more often than not, be the first port of call when an employee raises a grievance or a claim of sexual harassment, the importance of training your line managers to handle these conversations cannot be understated. From the statistics mentioned at the outset, many of these incidents go unreported. Arguably, an environment or atmosphere where an employee may not feel fully supported or comfortable in raising a complaint, may be a factor.

It is of utmost importance then, that even if your organisation or team has never had to manage a claim of sexual harassment, training on this topic is essential to provide a seamless process not just for the aggrieved employee, but also for you as a HR team who will be the people tasked with managing a claim and supporting the relevant parties toward a resolution.

And more generally, a positive organisational culture can go a long way to reducing the occurrence of any unwanted behaviour, not just sexual harassment. Guiding your line managers to creating and showcasing positive behaviours and values should always be at the forefront of HR strategy.

Where can I go for help in dealing with a sexual harassment claim?

“If you’re not confident in this area, pick up the phone, get advice. Half an hour talking to an expert goes a long way towards HR people getting this kind of thing right.” – Mary Cullen

Insight HR has been helping employers figure out all aspects of employment law, workplace investigations, employee challenges and much more, for over 20 years.

We can work directly with the employer and provide advice and guidance on how to deal with a sexual harassment claim, a workplace investigation, or anything related.

To find out more or to talk to one of our consultants in confidence call us on 056 770 1060 or email info@insighthr.ie.

For further guidance why not register for our next free HR Room Webinar – Sexual Harassment In The Workplace, to get live interactive guidance from the experts. Save your spot here!