Theft in the workplace – do I need to involve the Gardai? 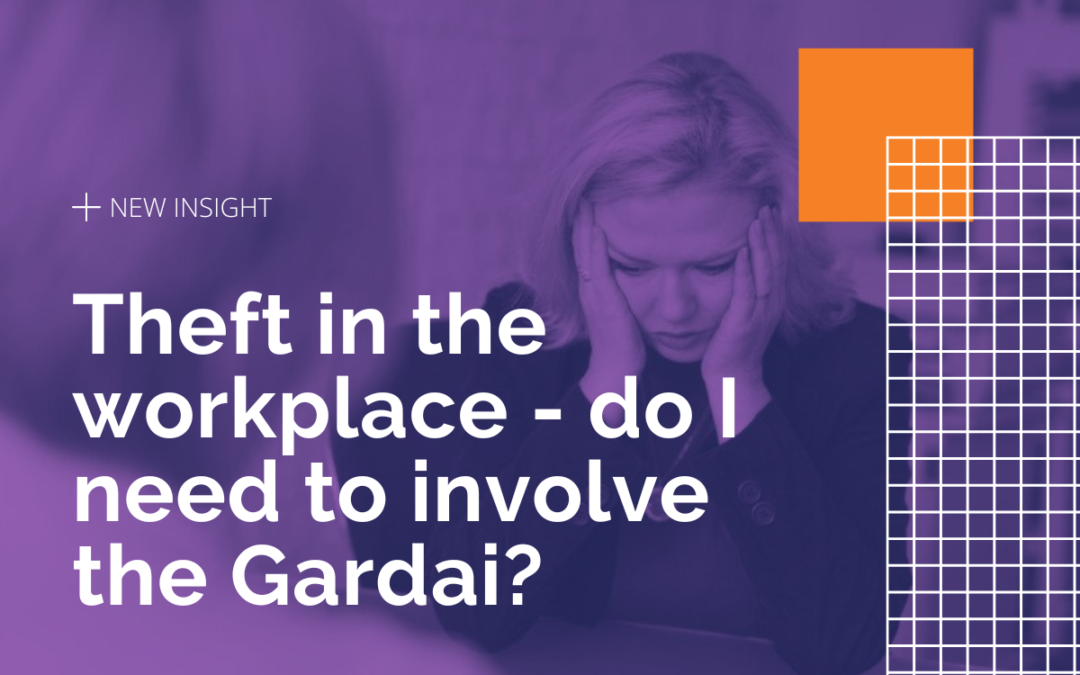 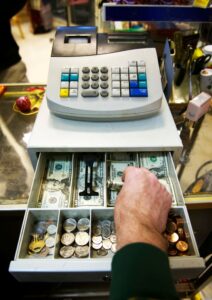 till. It’s a pretty unambiguous sign that an employee could be stealing from their employer. If only all suspected cases of theft were so obvious!

Take the well-documented case in Donegal, where a woman was imprisoned for two years after stealing the sum of €760,000 from her employer over a six-year period from 2009. It wasn’t until 2015, when a new director at the company noticed large sums going missing, that the matter was investigated. In this case, the woman was working as an accounts administrator and had access to multiple bank accounts. Even so, it’s still a significant sum to go missing without being noticed, and just goes to prove how difficult it can be to detect workplace theft.

While this is an extreme example, theft in the workplace can actually come in many different forms including taking stock without paying for it, not documenting sales properly, stealing customer details such as credit card numbers, and much more. It can even present itself as seemingly innocuous actions, such as abusing the sick leave policy by taking paid time off for illness when not really sick, time-wasting while working by carrying out another job during working hours and making excessive personal phone calls from a company phone.

With so many definitions of workplace theft, how do you know which instances warrant legal action?

First and foremost, remember to proceed with caution. There could be a reasonable explanation, and the last thing you will want is to have a case of unfair dismissal on your hands. Even if you have undeniable evidence that an employee has stolen from the business, there are still proper procedures that must be followed before any disciplinary action is taken.

The employee has a right to a fair and impartial investigation and to review and respond to any evidence against them. If an investigation is conducted and it is found that an act of theft has occurred, and the employee is subsequently dismissed, then they have a right to appeal the decision. Those working in the HR function will no doubt appreciate the importance of having relevant policies and procedures in place, such as a Discipline Policy and an Honesty Policy. These must be documented and communicated to employees when they first begin work. An employee suspected of theft should also be reminded of the relevant procedures.

Reporting to the Gardai

Where the potential risk to the business is low, the most reasonable course of action for a business to take may be to launch an internal workplace investigation first in order to determine whether wrongdoing has actually occurred. There are a few reasons for this. From a business perspective, you may want to consider the effect that it will have on the workforce if you involve the guards without ascertaining the full facts of the matter – especially if it is discovered that the allegation is unfounded. Another reason is that the guards are also dealing with civilian crime, and it’s possible that an allegation of theft in the workplace may not be first on their list of priorities.

Remember too that when a criminal investigation is launched, the employee will likely seek legal representation. That representative may advise the employee to only discuss the matter with the Gardai or to simply refuse to comment during a workplace investigation. That means that any internal investigation into the incident may be delayed. The civil law standard for proof is the balance of probabilities, while in criminal law the standard is beyond a reasonable doubt. If there is not enough evidence to convict an employee in a criminal law setting, it may add complexity to the workplace investigation.

With all that said, if a serious crime is suspected, or there is a danger that evidence may be destroyed, falsified, concealed or disposed of, it is advisable to report it to An Garda Síochána immediately. Leaving it too late to report can mean that it is significantly more difficult to prove that any theft has occurred. As the criminal law standard requires proof beyond a reasonable doubt, any tampering of evidence can have serious consequences to the investigation of the case. Of course, the decision on when to involve the gardai should be made on a case-by-case basis depending on potential risk to your business and the likelihood of wrongdoing occurring again while the matter is investigated.

If you suspect an employee of theft, then you have a right to report it to the gardai. Moreover, it is actually mandatory under the Criminal Justice Act 2011 s.19 for all companies to report information they know or believe might be of material assistance in preventing the commission by a person of a ‘relevant offence’ e.g., theft or fraud, or securing the apprehension, prosecution or conviction of a person. The maximum penalty for an offence is an unlimited fine and imprisonment for up to 5 years or both. Employers should not ignore their reporting obligations and should seek advice at the earliest opportunity.

What can employers take from this?

An act of gross misconduct is one which breaches the trust between an employer and their employee(s). That means that if a breach of trust is proven to have occurred, then it doesn’t matter whether it was a post-it note someone stole or a large sum of money.

Consider the supermarket employee who lost his job for stealing some sweets from a tin of Celebrations. He brought a case of unfair dismissal against his employer; however the WRC dismissed the action, having found that the man had received proper prior warning that the company had a zero tolerance for theft.

In a similar incident, a hotel worker was discovered to have taken two cups of coffee powder from the hotel kitchen. As the hotel had a zero-tolerance policy he was dismissed for gross misconduct, and a later appeal to the EAT (now known as the WRC) was unsuccessful.

In both of these cases, the item that was stolen may be considered to be inconsequential to the business. However, any business with robust policies and procedures that make it clear that any theft is considered an act of gross misconduct – and this fact has been communicated to employees and proper procedure followed – will likely find themselves in a much better position to defend any later claims of unfair dismissal.

At Insight HR, we help businesses understand their obligations when there is a suspected case of fraud and/or theft in the workplace. We know that even the best prepared businesses can struggle with questions such as; whether it is appropriate to suspend an employee; how the matter affects the rest of the workforce; and at what stage to involve the Gardai. Our Head of Workplace Investigations, Marion Galvin, is an ex-Guard, and is best placed to answer any queries you may have. Contact us today via email, phone, social media or through our website and we will be happy to discuss your situation in confidence.

Get Your Free Workplace Investigation Guide

Join the private InsightHR newsletter group and get your free copy of the Irish Workplace Investigations Guide. You’ll also get bonus content to help you manage your workforce, including an invitation to our extended briefing on workplace investigations. 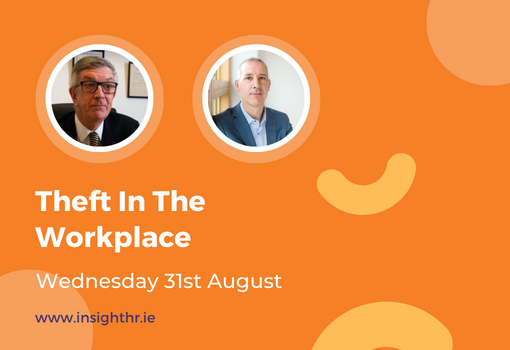 Theft in the Workplace

Join the Insight HR team and our special guest, Richard Grogan, on the 31st of August at 11:15 for our webinar on Theft in the workplace, where we will be taking a closer look at the legislation, procedures, and key considerations governing this tricky topic.

The HR Room is a FREE monthly online forum run by Insight HR where you can receive expert HR advice and have your burning questions answered. 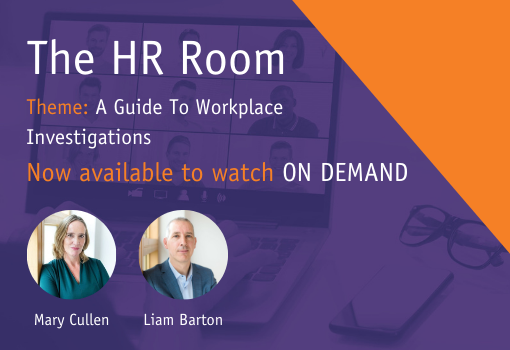 This is an ON DEMAND recording of a webinar which took place on the 23rd of February 2022.