by Eoin Lyons | May 11, 2022 | Discipline and Grievances, Employee Discipline 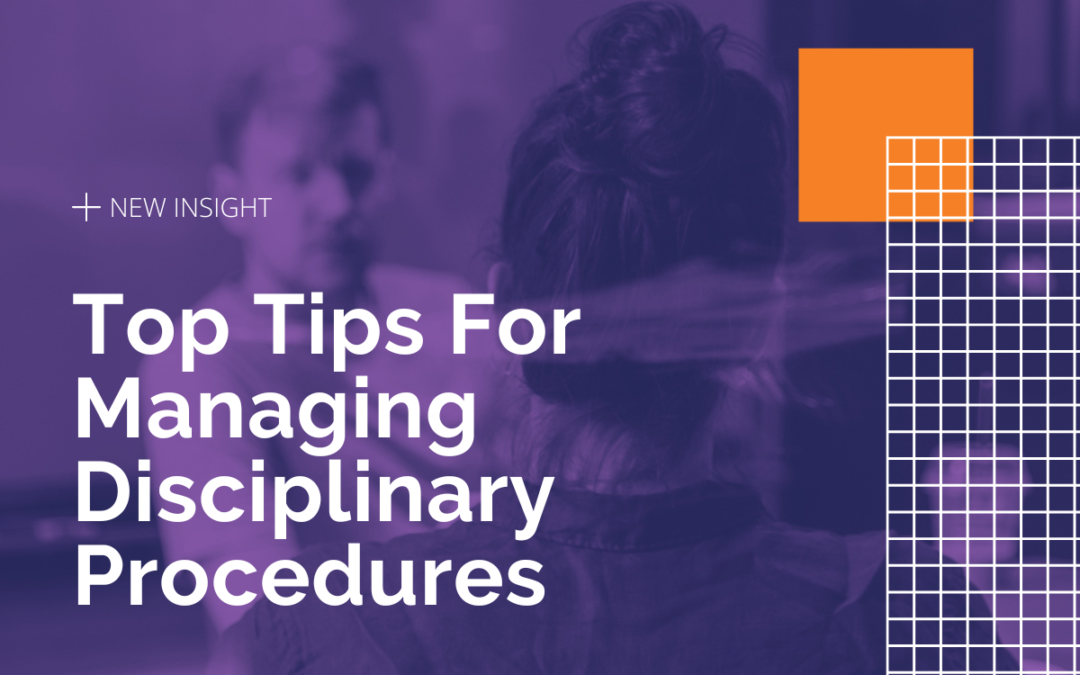 Disciplinary actions may be necessary for a variety of reasons relating to employee performance, conduct and behaviour. Depending on the nature of the issue, the sanction may include a verbal or written warning, demotion or even dismissal.

Managing that disciplinary procedure can present a minefield for employers. There are certain steps which must be followed. You will need to be able to prove that fair procedures were followed. You will also need to make sure that all issues are dealt with sensitivity and tact.

With the complexity of these issues and the lack of expertise in many HR teams, we want to help.

This week, we hear from Mary Cullen & Liam Barton from the Insight HR team, who shared their top tips for managing disciplinary procedures!

Give feedback informally, and early!

“If there’s performance, behaviour or conduct that an employer is concerned about, the first thing you do isn’t leap on to a formal process, the first thing is to handle it informally.” – Mary Cullen

Thankfully, often an informal chat with the employee in question may be sufficient to resolve the issue that has arisen. A quiet word, a 1:1 discussion or something along those lines, can quite often resolve less serious matters, which is preferable for both parties and ideally maintains harmonious working relationships.

Often, this constructive feedback, when given correctly, resolves many situations before they even warrant any further action.

“An employee is meant to be able to withstand constructive feedback, and feedback on their performance.” – Mary Cullen

Put simply, during the informal resolution process, the employee should be;

If this informal resolution does not result in the required improvements the formal disciplinary procedure can then be invoked.

It is hugely important to ensure that line managers are not just aware of poor behaviour, conduct or performance but are also taking the necessary steps to deal with it, through an informal process such as this.

“A lot of issues are allowed fester or grow, and then someone, somewhere, sometime says enough is enough. Next thing, the employee finds themselves in a difficult process.” – Liam Barton

This early intervention is key, as it allows for resolution at the outset. As those of you who have previously managed disciplinary procedures will know, when the process begins in earnest, and third parties enter the fray, the whole situation can be quite arduous and difficult not just for the employee in question, but for the assigned HR person(s) too. The process can become quite emotive, and much more detrimental to the working relationships than if it were resolved early and informally.

“You have to separate out normal performance and conduct issues from really serious issues such as gross misconduct, such as bullying, harassment, fraud and theft – fundamental breaches in the organisations policies.” – Mary Cullen

While certain issues allow for informal corrective discussions through the disciplinary procedure, when issues such as the ones we’ve just mentioned arise, things can get more serious.

These more serious issues, are typically dealt with through the discipline procedure, usually with an investigation beforehand, with the ultimate sanction being dismissal. Your policy will usually set out the stages for this. Which leads us on to our next tip!

Know the code of practice, but most importantly, know your own policy!

Every employer in Ireland has a legal obligation to provide each employee with a written copy of the procedures to be followed when dealing with grievances and discipline at work within 28 days of their starting their contract of employment. Having a clear policy and procedure does not just satisfy your legal obligations, it also ensures that you and your organisation know what to do, and that your employee knows how the process will go.

As the code of practice gives general guidance on the process, coupled with precedence for best practices, many disciplinary policies here in Ireland are quite similar.

And the benefits of sticking to your policy are quite clear. Beyond the legal and contractual obligations, adhering to these policies also ensure you as an employer, have moved through the process with the correct structure, steps, documentation and evidence, that will inevitably hold up when a case reaches the courts or Workplace Relations Commission.

Liam clearly outlines some questions for HR professionals and teams to ask themselves, to make sure they’re clear on their own disciplinary process;

And as we always say, prevention is better than cure. While no workplace is immune from issues and the requirement for a possible disciplinary procedure, one thing that has stood out for Mary & Liam, is how a positive culture can go a long way to minimising indiscipline and conflict in the workplace. Although there may be no written policy on managing culture, it is certainly something HR teams can influence in practice.

“If a new employee comes in and sees an established culture of dignity and respect, diversity and inclusion, and where people are treated fairly and objectively, typically they’ll go with that, and will want to be part of that journey.” – Liam Barton

Be aware of the employee protections

Another key element which both Mary & Liam commented on, was the importance of sticking to fair procedures. As mentioned, the disciplinary process can be quite arduous for all parties involved, particularly for an employee whose livelihood may now be threatened, so fairness must be paramount.

“You must go through a fair process, but many employers trip up, by simply losing patience.” – Liam Barton

Even in serious cases, the disciplinary process must still comply with the general principles of natural justice and fair procedures. Dismissing an employee on the spot, even if you are convinced of the employee’s guilt, without first carrying out an investigation or allowing the employee an opportunity to be heard is not permitted.

These include giving your employee appropriate warnings, making them fully aware of the allegations against them and giving them an opportunity to present their side. You must also give them the opportunity to be represented in any disciplinary procedures by, for example, a trade union official or other representative.”

“Proportionality – the punishment must fit the crime.” – Liam Barton

There is also a key consideration for employers to look fairly and proportionally at the issue that they’re faced with, before deciding their course of action.

“There’s a difference between certain behaviours and certain misconduct. If someone loses their temper at a colleague, is that summary dismissal or gross misconduct? Probably not. In recent years, the WRC has very much placed an emphasis on behaviour that fundamentally changes the employment relationship, and the requirement for a really serious issue for gross misconduct or summary dismissal to take place.” – Liam Barton

It is the combination of adhering to the employee protections as set out in the Code of Practice and the employers mentality of approaching the situation with sensitivity and objectivity, that is of utmost importance. As Mary explains;

And know the key cost of getting it wrong!

“When a third party judges the actions of the employer, they’re going to look at the procedures that were applied and ask did the employer follow a fair procedure? And then they’ll look at the substantive issue and ask how reasonable was the sanction, given what the employee had actually done?” – Mary Cullen

In one recently well-documented case, the adjudicating officer for the WRC found that dismissing the employee in question was both substantively and procedurally unfair. The WRC was told that the employer hired a private investigator who spent three days carrying out “covert surveillance” of the employee at his home while he was on sick leave in April 2020. A complaint by the employee under the Unfair Dismissals Act against the company was upheld by the WRC.

Both proportionality and fair procedures were also highlighted in the case of a sales executive who according to the WRC adjudicator was “a frequently promoted, top performer, suspended via a phone call and was informed both that his employment was being terminated and his appeal was unsuccessful via email instead of being afforded the basic human courtesy of a face to face meeting in each instance“.

“Approach any HR/IR matter carefully and cautiously, as they can spread out beyond the organisation, damage the employer brand, and you can be publicly embarrassed.”

Where can I go for help?

“If you’re not confident in this area, pick up the phone, get advice. Half an hour talking to an expert goes a long way towards HR people getting this kind of thing right.” – Mary Cullen

Insight HR has been helping employers figure out all aspects of disciplinary processes for over 20 years. We provide a full suite of services in this area.

To find out more about disciplinary procedures or to talk to one of our consultants in confidence call us on 056 770 1060 or email info@insighthr.ie.

For further guidance why not register for our next free HR Room Webinar – Managing Disciplinary Procedures, to get live interactive guidance from the experts. Save your spot here!